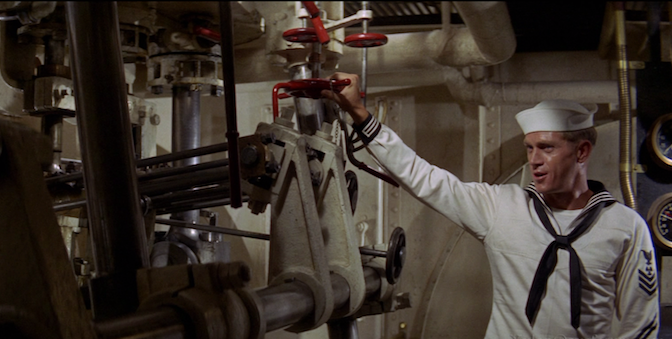 Continuing our mini-retrospective on actor and director Richard Attenborough, one notices that Netflix only musters seven films with his name in the credits – three of which he directed, three of which he acted in, and one of which is a documentary. Shouldn’t there be more of a selection for a guy who acted in nearly 80 different projects and directed twelve feature films, one of which won a Best Picture Oscar? Shouldn’t he have at least half of the Netflix catalogue awarded to William Shatner? Anyway.

Robert Wise’s The Sand Pebbles is an interesting one to be included in that hors d’oeuvre-sized offering, and it’s a film in which Attenborough shines. Steve McQueen takes the spotlight, as Steve McQueen is wont to do from time to time, but Attenborough’s character serves as a perfect compliment to the protagonist. McQueen’s Jake Holman and Attenborough’s Frenchy Burgoyne are aboard a U.S. gunboat (The San Pablo, though pronounced by some as Sand Pebbles) in the heart of China in 1926. It’s a time of revolution and both men get wrapped up in local and national affairs during their long tour.

Attenborough has said Pebbles was the longest shoot he ever worked on, including the epic Gandhi, and that the cast and crew spent 8 months in Taipei filming. Wise spent a full four years bringing the project to fruition, and the time spent and the care taken is evident in the epic sweep of the final product.

The film is sluggishly slow in most places. McQueen’s Jake cultivates a relationship with the engine of the ship (in the picture above he’s just said “Hello, Engine. I’m Jake Holman”) while Attenborough’s Frenchy cultivates a relationship with a local Chinese woman. The characters couldn’t be more unlike each other, but they build a mutual respect and even loyalty as their tour progresses. Also, Attenborough sports one hell of a handlebar mustache.

The Sand Pebbles takes its time, but is worth watching to see McQueen and Attenborough in two of their most distinctive roles.