Nothing says “happy holidays” like an incredibly violent, utterly vulgar, yet strangely comedic look at slavery and racism in the Antebellum South. Quentin Tarantino’s latest effort has garnered exceptional critical support, seeming to morph together styles and tones from three of his previous cinematic achievements: Reservoir Dogs, Kill Bill, and Inglourious Basterds. The scope of the film is quite epic, occurring over months in various Southern states, yet it in no way takes itself too seriously. Instead, Django is extremely humorous and several of its minute details, when given closer examination, actually seem rather bizarre, almost finding itself belonging to the Wes Anderson genre of film. While dealing with a very serious topic and maintaining an ethically appropriate opinion of said topic, Djano truly reels in its audience with its Oscar-winning dialogue and impeccable acting. The film may seem controversial to some, but anyone really paying attention will easily be able to understand the stance the film is taking.

The film has a subtle but significant Reservoir vibe to it. The plot is intricate and well thought-out; dramatic irony (when one or more characters are aware of something that others are not privy to) is abundant; and there is even a particular scene in Django that is a directorial parallel to a different scene in Dogs. Let’s discuss the similarity in complexity of the plot. These movies are no rivals to Inception when it comes to complex storytelling, nor are they trying to be, but they do certainly contain these types of elements. Dogs places a police officer undercover in the mafia, thus tricking the mafiosos into believing that he is one of them. Django places an African American in the fourth largest slave plantation in Mississippi, posing as an expert in the well-regarded field of Mandingo fighting; in front of Leonardo DiCaprio, no less. This similarity simultaneously explains both the intricacy of the plot and the abundance of dramatic irony. And then there are the scenes using the slow-motion walk. If you do not recall what I am talking about, you now have an excuse to go rewatch these fantastic films.

The film also contains similarities to both Kill Bill and Inglorious Basterds. Kill Bill brings extreme violence to its viewers, as does Django. The wildly bloody scenes in both of the films are often elevated by the quick, witty dialogue that accompany them. However, in Kill Bill, violence is provided by the personal weapon of a sword, whereas the latter brings the heat with a couple smoking barrels. Basterds finds its common ground with Django in terms of its relation to the issue of oppression. One deals with Jews in Nazi Germany, while the other is concerned with slavery and racism pre-Civil War in America.

The acting in this film is superb. Christoph Waltz took home the Best Supporting Actor Oscar with his highly involved, comedic-at-times, intense-at-times, bighearted role. Furthermore, Jamie Foxx portrayed his title character remarkably. His ability to play a slave, a bounty hunter, and a lover all in the same film was truly impressive. Despite both of these performances, the turns made by Leonardo DiCaprio and Samuel L. Jackson are the standouts. Jackson gave his perhaps too-loyal character a deeply intimidating persona that really made his getting shot in both kneecaps at the end of the film rather satisfying. However, not as satisfying as seeing Waltz put one through the heart of DiCaprio’s Calvin Candie. For anyone saying that DiCaprio can only play the good guy, go see this film. He turns in one of the most sinister, detestable performances of the new decade and, other than his efforts in What’s Eating Gilbert Grape, is probably his greatest supporting acting performance.

The writing, while certainly explicit, is yet another awesome aspect of this film. Many have found that the frequent use of derogatory phrases makes them uncomfortable. I think, to that, Tarantino would answer: Good. That’s really the whole point isn’t it? He wants you to feel uncomfortable, he wants you to realize how truly dismal society was in the Antebellum South, how awful it must have been to an African American in that time and place. For all the absurdities in this film, that is one thing that seems excessive, but is actually quite accurate.

Django Unchained uses its incredibly fun and outrageous nature as a vessel with which to bring its serious themes and ideas into the minds of its audience. It’s one in a kind. It’s Tarantino. 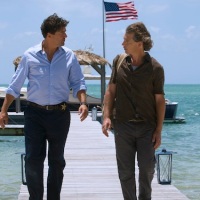