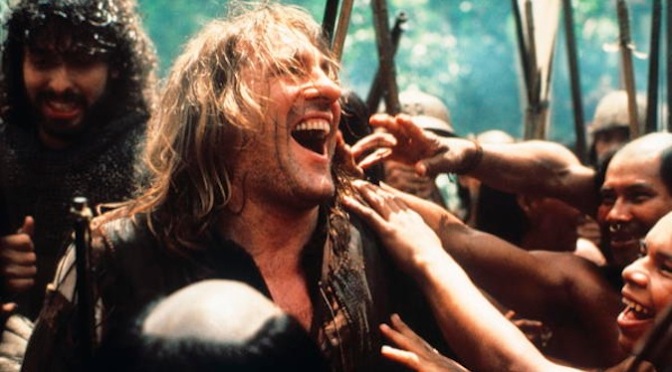 I think of Ridley Scott as a badass. Chalk it up to me being a little tyke when Gladiator and Black Hawk Down came out, or to his most famous films being the sleek and surefooted sci-fi flicks Alien and Blade Runner. I watched his most recent film Exodus: Gods and Kings, in which Moses is played by Batman, and the reaction was more or less the same: this dude just made the Bible badass. Let’s be clear in stating that Exodus is a pretty poor effort, and so I don’t mean “badass” as a full compliment. But that sleekness and that direct, immediate pacing holding a healthy amount of action is what I associate Scott with, and if nothing else Exodus certainly was a spectacle.

Then I watched 1492: Conquest of Paradise. Gérard Depardieu plays Christopher Columbus, discoverer of America, fighting to explore what he knows to exist past the European horizon. The film opens in 1490 or so, as Columbus gathers a head of steam for his royally-financed expedition — the always-superb Armand Assante plays the nobleman Sanchez, and Sigourney Weaver plays Queen Isabel. Columbus pushes for his dream. Sanchez and Co. conspire to gain from the ambition of the explorer, and there’s an overwhelming sense in this opening half-hour that — for lack of a better descriptor — shit is about to go down. Maybe Sanchez will plant a spy on the Santa Maria, or maybe he’ll do something even more dastardly.

No? Hm. Maybe 1492 is a Scott movie with some restraint after all? We board the ships with Columbus and his ragtag crew. Surely here, in such a hot and wild incubator bound for such an imprecise and possibly nonexistent Eden, shit will go down. But, again, no. The Spaniards are grungy and emaciated and desperate and sea-mad, sure, but they’re still remarkably well-behaved.

We arrive in the new world. The group gear up and press forward, entering the forest at the edge of the beach and spreading as a parasite spreads through a limb. The music (done by Vangelis of Blade Runner) builds ominously. A lone drummer leads this Spanish column through the thick jungle, followed yards behind by Columbus and his men. The drummer enters a shadow draped by long enveloping branches, and in a moment his drumming ceases. Columbus stops and his men stop behind him, and they peer into the shadow ahead. The music strikes a tense chord as Columbus sweats and breathes. He’s thinking one thing: shit is going down.

Natives appear. They’re armed and ready. We’re ready, too, for some good ol’ fashioned Ridley Scott badassdom. Columbus doesn’t want to fight — he’s an honorable protagonist, after all — but his hand is probably about to be forced. This will probably be the stage-setting moment for the rest of the film: the mind-their-own-business natives and the mind-everyone-else’s-business colonizers meet, Columbus in the middle, and terrible violence ensues. This will probably be Scott’s meditation not on the grim future of the modern world but on the grim founding of it, a stark depiction of a foundation laid in someone else’s blood.

…actually, wait. These people are bear-hugging Columbus. They’re so happy to see Columbus and crew, and Columbus and crew are so happy to be seen — why, this isn’t shit going down at all! And 1492 continues along this path, even though it’s populated by schemers and naysayers and a few genuinely evil chaps. Weirdly, it’s still exciting and gripping in most parts. By 1992 Scott was a veteran of the game, so it should come as no surprise that he’d mine even the most mundane-sounding scenes for “action” and clarity. At best, 1492 makes sequences like that initial-contact group hug (pictured above) into moments that are as fantastical as they are historical.

And yet, still, I arrived here because I wanted to watch a Ridley Scott movie. Are my film-enjoying faculties so diluted that I can’t enjoy something without being fed a bloody fight scene every fifteen minutes? I did enjoy 1492. Hell, I found myself identifying with Columbus just out of the sheer experience of expecting to find one thing (for him Asia, for me a sharp and stylish period piece) and happening upon something else entirely (for him America, for me measured and atmospheric period piece).”My ship is not filled with the spices and treasures that I had hoped,” Columbus notes as he returns to Spain, “but this land intoxicates my senses and my soul.” If Scott truly intended me to have that exact reaction to 1492, then he’s a far greater master than I give him credit for. I’d say “1492 filled my boat with sensual intoxication”, but I’d hate to arouse anyone.

Around the two-hour mark there’s a sizable battle sequence. Prior to this, and to my great surprise, I really liked 1492 in spite of the frequency of buildups and the infrequency of any release. When the release came in the form of a bloody, brutal, screaming fight between the natives and the newcomers, it actually let me down immensely. Again, you can venture that this might be part of the point — that this was Eden, unspoiled, and as soon as “civilization” was proposed all bets were off — but that fact doesn’t serve to make the back half of 1492: Conquest of Paradise any better. Worth watching? Go for it, as long as you check your expectations at the door.