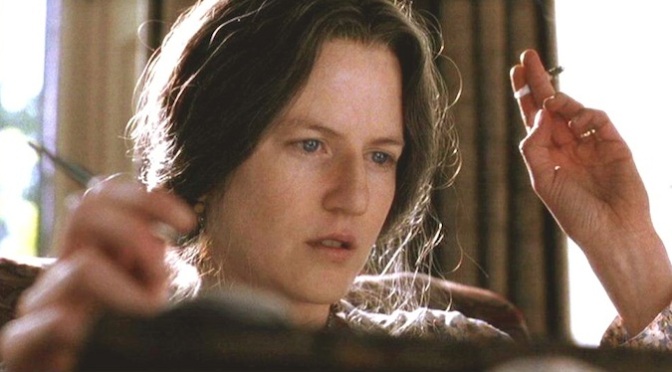 The first question one might ask about a movie is “what happened in it?” After all, the average viewer usually watches a movie to see what happens. However, in a strange way, what happens in Stephen Daldry’s The Hours does not seem to be the most important aspect of the movie. And while The Hours certainly does have a lot going on — three different stories and time periods, a couple suicides, more contemplated suicides, homosexuality, bisexuality, and historical and literary relevance with Virginia Woolf as a prominent character — the actual plot does not draw the viewer in quite like the acting, the dialogue, and the beautiful music. It doesn’t take an advanced movie critic to notice these aspects either; after all, they caught my attention almost immediately.

The masterful dialogue in the movie makes sense to a degree, for the screenplay was heavily influenced by Michael Cunningham’s novel of the same title and, of course, by the incredibly gifted Woolf. Listening to the characters converse, the viewer feels no less enthralled than if they were voraciously reading a page from any of Woolf’s great body of work.

In fact, I could fill the entire rest of the review with quotes from the movie and it would be the best thing I ever put in print (and plagiarism, granted). Yes, believe it or not, I don’t believe my abilities as a writer do or will ever surpass those of the collective writing mind of Virginia Woolf, Michael Cunningham, and screenwriter David Hare. But pure jealousy is not why I won’t shower the rest of this review with quotes; no, it’s because it would not do the dialogue justice, at least not the justice that the actors and actresses gave it.

Now, the movie had nine Academy Award nominations, three of which were for acting. But here’s the weird part: Meryl Streep wasn’t nominated, and instead Nicole Kidman and Julianne Moore snagged the nominations for Best Actress and Best Supporting Actress respectively. Which, I suppose, means that in the Academy’s eyes Kidman and Moore out-acted Meryl Streep — an actress we all know the Academy loves — in her own movie. Whether that is actually the case is certainly debatable, as all three of them were nothing short of fantastic. But it gives a good sense of how good Kidman and Moore were, because obviously Streep was no slouch in her role — the day that happens is the day acting dies.

All three women give off the Mrs. Dalloway vibe (in Streep’s case, partly because her character, Clarissa, is occasionally called Mrs. Dalloway), showing that on the outside they want to appear okay, as if everything is fine, but, on the inside, that could not be further from the truth. There is a quiet depression and desperation within all of them, a drive to escape by whatever means necessary, even if those means go as far as suicide.

Obviously, Kidman’s performance stands out because she is playing Virginia Woolf herself, certainly a tough character to understand, let alone depict. Nonetheless, the almost unrecognizable Kidman does put on an Oscar performance. My only gripe, however — and perhaps this would be best taken up with the director or the Academy for their categorization — is that she was not in it enough. For a Best Lead Actress win, I would’ve liked to have seen more of the makeup-covered Kidman in her quiet state of entrapment. Some of the most powerful scenes are with her in them — particularly in her discussions of death or her state or her suicide itself — partly because they are based in fact, but mostly because of Kidman. I guess if the only criticism of the performance was that there wasn’t enough of it.

Outside of the three leading ladies, Ed Harris is the next actor to really stand out. His Richard Brown is another complicated character, a bisexual author and poet, near death with AIDS who stays alive only for Clarissa’s sake. His conversations with Clarissa about how his life is now and how it used to be are wonderfully acted.

Richard or Richie is also the source of the two big twists in the movie (besides Woolf’s suicide, but I think at least a fair amount of people probably knew that one was coming). As it turns out, the older Richard is the son of Laura Brown (Moore) who nearly killed herself, and then abandoned her family to escape the life and marriage she felt trapped, or more accurately, not even alive in. The impact of her absence can be seen in Harris’ portrayal of the older Richard.

And, finally, in his final climactic scene, he gently rolls himself out of a window, ending his life. During this scene and really all of the others, the music provides a powerful backdrop. It is not often that a movie score is one of the most defining and entertaining aspects of the movie itself, but with Philip Glass’ score for The Hours this is exactly the case. The music doesn’t domineer over the action or the dialogue, but it does set the mood of each scene, in fact, quite beautifully. In Richard’s suicide scene, for example, the music builds up climactically — like the movie — to that one moment. In that scene and many others, Glass was able to draw the viewer in using just his music.

In a broader sense, the movie as a whole completely draws the audience in with the music, the acting, and the dialogue — because of these three aspects, the audience sticks around for the plot and to hear what the movie has to say about powerful topics such as life, death, suicide, bisexuality, quiet depression, the 1920s, Virginia Woolf, post-WWII America, the 21st century, and so many others.

It is not a movie I will rush to re-watch multiple times, but it also not one I will soon forget. I promised I wouldn’t spoil the quotes in this review, but I can’t resist including Woolf’s parting words about life in her suicide note. In their original context, these words are infinitely more significant and relevant, but are too powerful not to include — and, as such, remain one of the most memorable parts of the whole movie. Woolf, in her last stroke of writing genius wrote that what mattered, in the end, was “to look life in the face and to know it for what it is…to love it for what it is, and then, to put it away”