This article first appeared as a part of the Brattle Film Notes commentary series, presented by the Brattle Theatre in Boston, MA, for a special screening of Free Fire. Slight edits have been made from the original posting. 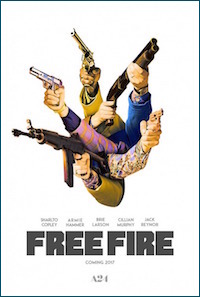 Prolific director Ben Wheatley followed up 2015’s High-Rise with Free Fire, another film about the disintegration of a boxed-in mini-society. Both efforts are similar in this sense, observing a group of strangers forced into close quarters, casting us as the voyeuristic witnesses on a direct descent away from normalcy. Both films begin methodically, High-Rise introducing a futuristic all-inclusive living complex and Free Fire peeping in on an arms deal in an abandoned warehouse. And both can only ever end one way: in chaos, loud and bloody.

But it’s still remarkable how different these two films are, despite the apparent similarities and the fact that both were crafted by Wheatley (with co-writer Amy Jump) in the span of a single year. Free Fire justifies itself in the approach, heavily drawing on Reservoir Dogs-era Tarantino to convey vital information through seemingly innocuous dialogue as much as visual staging. Words do all the work here, with snippets of conversation managing to develop characters and propel the narrative at the same time. The arms deal brings buyers, sellers, intermediaries, muscle-for-hire and assassins-for-hire into a confined space, but before the guns come out it’s dialogue that each party attempts to weaponize.

The guns do come out, of course, as we always knew they would. IRA gunrunners Chris (Cillian Murphy) and Frank (Michael Smiley) clashed with dealers Vernon (Sharlto Copley) and Martin (Babou Ceesay) from the start, and it turns out underlings Stevo (Sam Riley) and Harry (Jack Reynor) have a history, and intermediaries Justine (Brie Larson) and Ord (Armie Hammer) seem a little bit too relaxed… suffice it to say that when lightning finally strikes it’s not necessarily the fault of any one individual. The conditions were just perfect for a storm.

Where High-Rise might allude to this inevitable breakdown visually – say, with a shot of the fruit in the supermarket slowly rotting, begging for interpretation – Free Fire chips away at the facade of diplomacy the old-fashioned way, with one ego pitted against another. It helps that Fire boasts a murderer’s row (sorry) of actors from across the globe, all of whom are having a blast playing mouthy criminals. The fact that the film hardly has anything resembling a plot ceases to matter with the presence of a cast this talented having this much fun. Dialogue and delivery prove to be both propulsive to the narrative and incendiary to the character relationships.

Which is not to suggest that Free Fire is devoid of visual storytelling. We’re shown a character with a black eye and another with bruised knuckles long before the characters themselves piece together that these two had an altercation the previous night. The setting is subtly dynamic, too, as what initially appears to be an empty warehouse becomes a lethal obstacle course with a surprising number of makeshift weapons lying around. Still, the gleeful pacing of Wheatley’s film mostly derives its appeal from the script, from the character egos and, yes, from a near-continuous stream of bullets.

There’s a great scene at the halfway mark where the gunfire dies down for a moment. It’s not diplomacy or any hope of reconciliation that stays the triggers; everyone’s just losing too much blood to keep shooting. During this interlude a few characters forget which side they’re on or who they’re supposed to kill, a pair of assassin characters enter the fray with no introduction whatsoever, and then there’s a quick fight between Hammer’s Ord and Reynor’s Harry that involves tickling, not murdering. Maybe the humor inherent to this interlude is why Free Fire works where other similarly-minded “claustrophobic” thrillers do not. As with the “Stuck in the Middle with You” dance scene in the aforementioned kindred spirit Reservoir Dogs, one might think a tickle fight somewhat unnecessary to the narrative arc of a film about an arms-deal-turned-bloodbath.

The Ord-Harry ticklefest is one of a series of seemingly random occurrences that nonetheless make Free Fire such a memorable romp – and, of course, Ord eventually shoots Harry dead. In a slight detour away from the social commentary of High-Rise, Wheatley hangs his latest film on littler things – Stevo’s makeup, Vernon’s suit, a John Denver cassette, an endless stream of barbed one-liners – that roil in the same cauldron until the whole thing bubbles over. And Free Fire is all the more enjoyable for boasting such a carefree attitude, ignoring the best advice of one of its own characters: “Keep your shit together.”