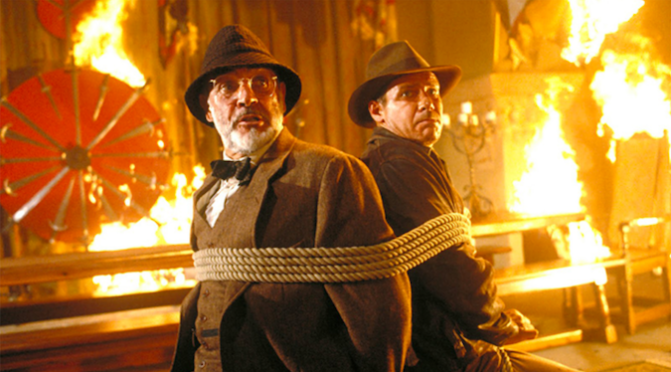 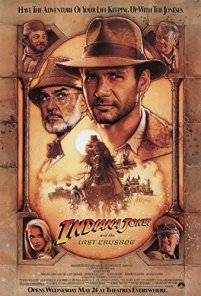 Pretty much everyone knows Indiana Jones. He’s a popular guy! The hat, the jacket, the bullwhip. If you’ve met him, these facets of his character ensure that you’ll remember him; if you haven’t, these facets still get thrown around in rumor and legend and make it feel like you’ve met him. I’m not talking about you and I, of course, or the world in which we happen to live, although pretty much everyone does know Indiana Jones. But Indy’s own world, in-movie, isn’t so dissimilar in that regard, and in fact his popularity might even be greater amongst the countless supporting characters who’ve seen him in action, experienced his -ness, or simply caught wind of his legendary adventures.

We talked about the much-feared superheroification of Indiana Jones in our review of Raiders of the Lost Ark, and thankfully that hasn’t happened yet (although we came pretty damn close in 2008). The hat, the jacket, the bullwhip — memorable, yes, but not actually the things that make Indy Indy, any more than the Walther PPK and the martini make Bond Bond. Still, they are the non-lingual facets of his character that have universal appeal, building a mythology such that you could sketch the character’s outline and have it be recognizable to anyone.

The same level of recognition seems to be present in-world, particularly throughout Raiders. Pretty much every main player in the film — Brody, Marion, Sallah, the rival Belloq — all know Indy personally before the events of the movie even begin. That jungle-set opening drives home a further point, with Indy’s two guides clearly familiar with his legend despite never having seen him before. It happens with almost every single supporting character for the rest of Raiders, actually, encountering Indy all doe-eyed from having heard so much about him already:

That’s characteristic of Temple of Doom and Kingdom of the Crystal Skull, too, wherein Indy travels through the Far East and the Amazon and still gets fangirled:

It’s a strong world-building device that implies an established mythos, suggesting an even greater adventure ahead: if Indy’s past exploits are so famous, then you’re gonna wanna stick around for what happens next. But after Raiders, which introduced that trope and justified a legendary reputation for the main character, and Temple, which uses the trope the same way despite being set before the events of Raiders, it’s Last Crusade that finally elevates it to the next level.

On one hand, it makes sense that Last Crusade wouldn’t necessarily need to shore up Indy’s stature. In our world, a Spielbergian threequel hardly needs to establish the character’s fairytale status again. In-world, too, it’s arguable that Indy’s exploits would by now have actually earned him such high regard across the world. And indeed they have:

This time around, though, Indy’s past actually matters for the story at hand. Instead of a wink-wink intimation at an existing relationship between him and, say, a rival treasure-hunter, the prologue of Last Crusade lets us experience that past before bringing us forward in time to the now-familiar moment of “hey, I know you!” Though it usually plays as a gag, the frequent mix-up between Indy and his father whenever someone asks for “Doctor Jones” adds a new wrinkle to what we previously thought was a straightforward urban legend. Heck, maybe people were actually hearing stories about Jones Sr. this whole time. How much of Indy’s legend is actually his?

It’s a subtle inversion that shakes up both the diegetic and narrative idea of Indy’s reputation; everyone may have heard of Indiana Jones, but very few know about “Junior”. And again, even though the thread is very often utilized for humor, the fact that the rug is suddenly being pulled out from under this established trope is representative of the many ways Last Crusade moved the ball forward. As such, in another humorous beat, we finally cross paths with the one guy that (thankfully) doesn’t recognize Indy:

The net effect of these little inversions throughout Last Crusade make for an adventure of greater significance than Temple of Doom or Kingdom of the Crystal Skull. It’s tough to say that same sentence for Raiders, which is likely nearer and dearer to my heart than Crusade, but maybe both serve the purpose they’re meant to serve. When you think of Indy you think of the hat, the jacket, the bullwhip, of Indy weighing a bag of sand against a golden idol, of the electric tension between him and Marion. Raiders has all of that in spades. But if you want to actually know Indy, Last Crusade has the man behind the legend.