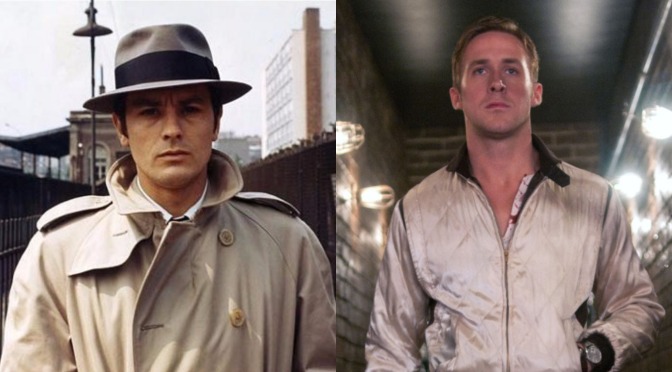 The inspirations for Nicolas Winding Refn’s 2011 film Drive are no secret. Perhaps the most direct analogue is Walter Hill’s The Driver (1978), which shares so many of the same characteristics that Refn’s film stops just short of being a remake. The general plot of both follows a nameless getaway driver of exceptional skill as he navigates a complex web of criminals, cops and would-be lovers, speeding to stay one step ahead as these forces converge around him. Drive features more minute homages to Hill’s film, too, including a redo of a particularly iconic scene in which the eponymous Driver (Ryan O’Neal) executes a high-speed chase in reverse gear. There’s something very American about a car chase in reverse, no? Difficult to say whether the instances of breakneck backpedaling in Drive or The Driver are done well, though, when the only competition is from the likes of The Transporter, Fast and Furious, Talladega Nights, etc…

Anyway. There’s sadly no reverse car chase in Le samourai, Jean-Pierre Melville’s quiet masterpiece of crime and criminal code. But it is undoubtedly an influence on Refn’s Drive, and is in many ways a more appropriate analogue than Hill’s Driver. Starring Alan Deloin as a largely-emotionless killer-for-hire, Le samourai went a long way to establishing a minimalist aesthetic in the gangster film — a genre more often associated with shootouts, explosions, larger-than-life mobsters and, yeah, reverse car chases. But the quietude of Melville’s film is haunting, reflected in the flat visage of its main character, and Le samourai went on to influence Woo’s The Killer (1989), Frankenheimer’s Ronin (1998), Jarmusch’s Ghost Dog (1999), Mann’s Collateral (2004) and countless others.