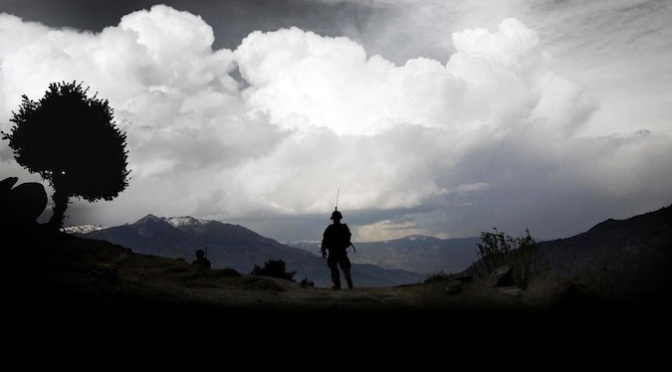 I had the good fortune of meeting Sebastian Junger a few years ago in Boston as he did the press junket for his book War. From mid-2007 to mid-2008 Junger was embedded with a U.S. unit in the Korengal Valley in Afghanistan with his friend and photographer Tim Hetherington, and War was one of the many pieces of journalism that resulted from that year. Another was a series of Vanity Fair dispatches collected as “Into the Valley of Death“, which is an excellent companion to War and an excellent account of that year in the Korengal. But the most affecting portrait from Junger’s tour as a war journalist might be Restrepo, the documentary he and Hetherington directed from the thousands of hours of footage they took during the year and ensuing interviews with the soldiers immediately upon their return home.

The Korengal Valley (sometimes spelled Korangal) was at the time dubbed the deadliest place in the world, an overblown-sounding moniker that is nonetheless entirely lacking exaggeration. U.S. troops in the Korengal took fire from Taliban insurgencies every single day, often engaging in five or six firefights between dawn and dusk. For soldiers on a fifteen-month deployment, that’s an unheard-of amount of action. By the time the U.S. pulled out of the Korengal in April 2010, nearly fifty American soldiers had been K.I.A. there. Seventy percent of ordinance dropped throughout Afghanistan during the course of the war was dropped here. In an interview with CNN, Junger describes the Korengal as “the Afghanistan of Afghanistan, too remote to conquer, too poor to intimidate, too autonomous to buy off.”