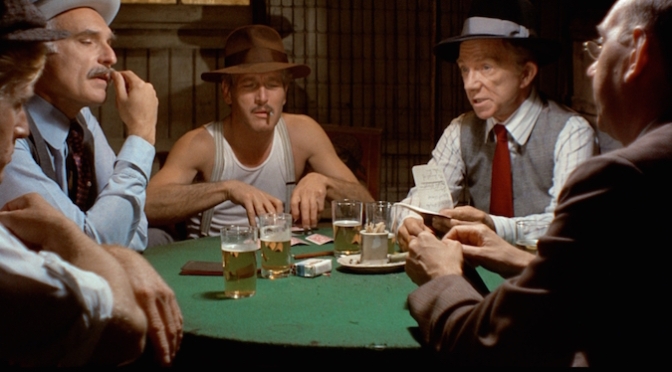 This article first appeared as a part of the Brattle Film Notes commentary series, presented by the Brattle Theatre in Boston, MA, for a special screening of The Sting. Slight edits have been made from the original posting.

In many instances a film is like a con: it wants to hook you, it wants to make you personally invested in the outcome, and it wants you to walk away with a smile on your face and slightly less in your wallet. If the endeavor is a success, there will always be enough to suggest that the artist — the film artist or the con artist — knows a truth that you do not. If the endeavor is unsuccessful, the feeling of being cheated will linger and frustrate.

If we apply this analogy to today’s film industry, of course, then the Marvel Cinematic Universe might be considered the most ambitious long con in Hollywood history. But things weren’t as complicated in 1973, and that year produced arguably the least-complicated Best Picture winner ever in George Roy Hill’s The Sting. A complex plot, high stakes for hardnosed characters, themes of friendship and honor amongst thieves — these elements are all there, but they’re intentionally deployed to the background of a filmgoing experience that’s less concerned with a moral message than a good time.

Part of The Sting‘s brilliance lies in the narrative structure, something of the perfect paradox in script design. On one hand, you might never consciously recognize the traditional beats of a three-act story as the film zips along, light-footed, sharply-dressed, completely carefree. On the other hand, the beats of the story are quite literally spelled out for you on seven title cards interspersed throughout the narrative: “The Players,” “The Set-Up,” “The Hook,” “The Tale,” “The Wire,” “The Shut-Out,” and “The Sting”.

In this intentional narrative construction, these cards describe both the stages of the con and the stages of the script. Before the first establishing shot of a dirty back alley in 1936 Illinois, we get “The Players”: Paul Newman’s sly Gondorff, Robert Redford’s gleeful Hooker, Robert’s Shaw’s decidedly-less-than-gleeful Lonnegan. There are thousands of movies that introduce plot or setting before introducing the characters (perhaps preceded by a baritone prologue intoning “In a world…”), but The Sting is built like a confidence game, specifically a “long” con, and by definition these begin with the players and fill in the plot and setting as needed. Thus does “The Set-Up” follow Redford’s Hooker while still making mention of both Gondorff and Lonnegan, thinking ahead to the inclusion of characters that will come into conflict in the film’s finale.

At this point in the film we get “The Hook”, likely the most accurate descriptor of the critical turning point in both con and script. If Gondorff can cheat Lonnegan at the poker table, the mark will be hooked and the game will move past the point of no return. Likewise, if the scene conveys high stakes and real danger for our protagonists, The Sting will have successfully hooked the viewer and propelled the story into the second act. It helps both cases that Newman chews scenery as Henry Gondorff throughout “The Hook”, fooling Lonnegan into thinking he’s a drunk and fooling us into thinking he just might lose.

“The Tale” and “The Wire” bring about the second-act confrontation and another major plot point; the latter introduces the character of FBI Agent Polk, determined to use Hooker to bring down Gondorff once and for all. These revelations play into “The Shut-Out” in much the same way as the middle act of a traditional three-act narrative plays into the finale. We see everything going according to plan for the team of con artists, swept up in a ragtime-fueled montage of impending triumph…but then a surprise detour simultaneously derails our expectations and the expectations of the protagonists.

The wild card here is that The Sting pulls two types of cons, one on the character of Lonnegan and one on the audience. Despite being structured as a long con in much the same vein as Gondorff’s “big game”, the last subsection of the film slips in a short con on the viewer in the fake deaths of Gondorff and Hooker. Up until the introduction of FBI Agent Polk, we’re treated to the same inside knowledge as the team of con artists. Naturally, we assume we know everything when the final title card for “The Sting” appears. But FBI Agent Polk is not, in fact, FBI Agent Polk — he’s another con artist, and we’ve effectively been hoodwinked just like Lonnegan.

Structuring a film to mirror an aspect of the story at hand is hardly a rare occurrence. Christopher Nolan did it with The Prestige, entrusting Michael Caine with expository dialogue that describes the three-act flow of the film narrative as easily as it describes a magic trick; Memento and Dunkirk are similarly built to evoke the experience of the characters within the film. But The Sting managed to push the narrative construction to the background, resisting the urge to shove it in your face, using it only in service of a freewheeling air of verve and unpredictability. In this case, I’m happy to have been duped.