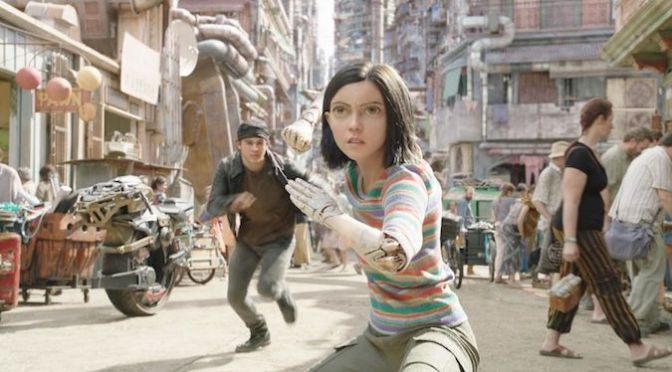 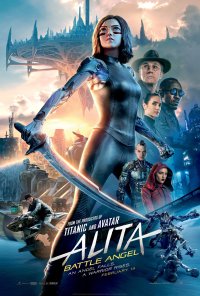 You’d certainly be forgiven for thinking Alita: Battle Angel to be a new movie by James Cameron. It gives off his scent in more ways than one, but primarily in the union of completely gangbusters special effects and a completely lackluster script. Cameron’s credited as a producer, though, not that the title of “producer” can actually ever have one single definition. Based on the manga series Battle Angel Alita, the film adaptation is in actuality directed by Mexico Trilogy and Sin City helmer Robert Rodriguez, the guy who once claimed his approach as “Mariachi-style” — in which “creativity, not money, is used to solve problems.” There’s an immediate discordance between that approach and the mere notion of James “Titanic” Cameron, and Alita very clearly exhibits the latter’s big-budget sensibility at the expense of an underdog’s incumbent creativity.

Which is a shame, because that’s ostensibly what Alita is about. The title character (played by Rosa Salazar) is a spunky cyborg with a mysterious past, brought back to life by kindhearted scientist Ido (Christoph Waltz) in a war-torn world all but discarded by the elite who reside on a giant floating city in the sky. “Lower” and “upper” class are literalized, and promise of ascension to that higher world is enough leverage to get anyone to do anything. The setup is nearly verbatim to that of Elysium, with an impending reckoning between the rough-and-tumble Earth-dwellers and those nasty domineers above. But the reckoning never happens, despite a colossal amount of exposition pointing in that direction, and apart from a useless cameo (more on that in a second) we never even glimpse one of those nasty domineers.

Granted, Alita could have been a strong film even if the floating city had been excised in its entirety. The primary failure is in the emotional stakes of the movie, which exist only sporadically and only in relation to Alita and Ido. In a blockbuster as reliant on CGI as this one, usually those basement-low stakes are borne of the uncanny valley and an inability to find the human under all that digital makeup. Action needs danger to be engaging, and zipping through an effects-fueled sequence can often lose that sense of danger. Thankfully that’s not the case here, due to a nimble special effects crew and a guy like Cameron overseeing it all. The problem, ironically, lies with a story wherein any character can apparently be completely dismembered and still saunter through the next scene like nothing happened.

That happens to Alita herself twice, and the villainous cyborgs of the film are similarly obliterated and then simply remade. The action is not “boring” in the sense that you’ll be checking your watch or waiting for the scene to be over, but it is boring in the sense that none of the characters ever seem to be in any actual peril. There are human characters alongside the cyborgs, too, including those played by Waltz, Mahershala Ali, Jennifer Connelly and Keean Johnson. Johnson plays Hugo, Alita’s love interest, who is stabbed in the heart prior to his death near the film’s end. But then a “skilled surgeon” removes Hugo’s head and installs it on a robotic body, and off they go into the next few scenes.

It’s tough to have any real concern about these characters when the risk level is so inconsequential. Alita and Ido have what may be the film’s sole meaningful relationship, and their daughter-father bond lends itself to a few fleeting moments of sentimentality. Salazar and Waltz are giving their all, with the former conjuring a memorable personality from beneath layers of CGI. Waltz, playing against villainous type, is sweet when he worries about Alita staying out after dark. But the low stakes still intrude, even in scenes where our character investment shouldn’t depend on risk or action. Ido’s onetime daughter was killed, hence his humanitarian bent and his drive to reinstate our cyborg protagonist with his lost child’s name “Alita”. But when he brings Hugo and a dozen other people back to life throughout the course of the film, it’s once again tough to believe in his grief over a character who wasn’t afforded the same convenience by the script.

And if Alita and Ido are the best of them, the supporting cast hardly register as motivated beings at all. As Motion State slowly finds itself becoming a Mahershala Ali Fan Site through our fawning over his performances in True Detective and Green Book, it’d be difficult enough to watch such a talented presence reduced to such a one-dimensional role. But Ali’s character also serves as a literal puppet for more than half of his scenes, an unseen villain continuously controlling him remotely from offscreen, so whatever motivation the actual character might have is suppressed into nothingness. Even if the qualms about danger and risk to the protagonist were rendered moot, the antagonist still needs a discernible motivation.

Finally, as if to declare once and for all that the story (that pesky annoyance!) has been all but cast aside in favor of a CGI fireworks display, Alita forgets to include an actual climax. Hugo is “killed”, reanimated, and then he and Alita take off skyward to reach Exposition City once and for all. But Hugo falls to his death (for now?) and Alita…returns to Earth. The film ends with yet more intimation that she’s going to make it up there, someday, but the ever-present promise of that revelation was teased for the previous two hours and then never fulfilled. Edward Norton appears for a half-second as that aforementioned domineer in the sky, the one who puppeteered Mahershala Ali. And then cut to black.

Some may shy away from being so harsh on Alita, spurred to goodwill by the dazzling effects, by Salazar and Waltz, even by the promise of sequels that must now come to pass. The fact that those sequels must come to pass in order for Battle Angel to become a worthwhile story is a tough pill to swallow, though, and it squanders any sympathy the best parts of the film might have engendered. Baiting a franchise at the expense of a single film is a pathetic way to try to bring us back for more, one that might admittedly gel with James Cameron’s zillion-dollar box office records. But it comes as a sad surprise from Rodriguez, once a scrappy storyteller, especially considering he’s been involved with multiple franchises in the past. His film El Mariachi, even though it spawned the Mexico Trilogy, never forgot that the only thing that matters is El Mariachi. While his new collaboration with James Cameron looks stunning and is likely to spawn more Alita movies, Battle Angel forgets to give us much to care about until then. 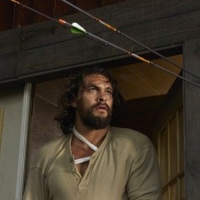 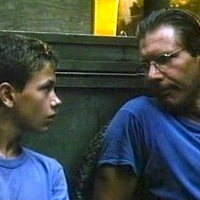