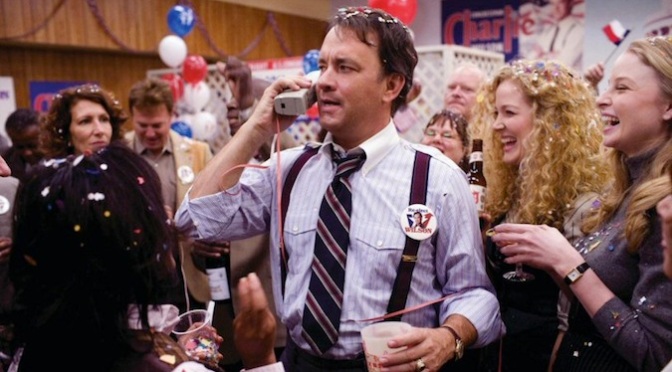 If this is Charlie Wilson’s War, then we’re the ones losing it. That’s part of the message at the conclusion of Aaron Sorkin’s script for Charlie Wilson’s War, based on the book of the same name by George Crile. “The ball keeps on bouncing,” Charlie says to the government suits that deny him what he needs to properly put his crusade to rest, and he repeats himself purposefully — “the ball keeps on bouncing.” This line is at the heart of this particular act of War, and as with many of Sorkin’s works the seemingly-muddled message is really just an unusually demanding one, designed for interpretation by those on either side of a given political line.

The movie starts and ends with the same scene: Charlie, the Reagan-era Texan House Representative inhabited here by Tom Hanks, stands onstage waiting to be introduced. There’s a banner hanging across the back of the hall that’s somewhat difficult to read, but it clearly says CHARLIE in BIG LETTERS. The moderator says a few words about this man, this wonderful man, and Charlie approaches the rostrum to a standing ovation. His chest is slightly puffed out — just slightly — and Charlie smiles the Tom Hanks smile. The message in this scene is clear: he did it.