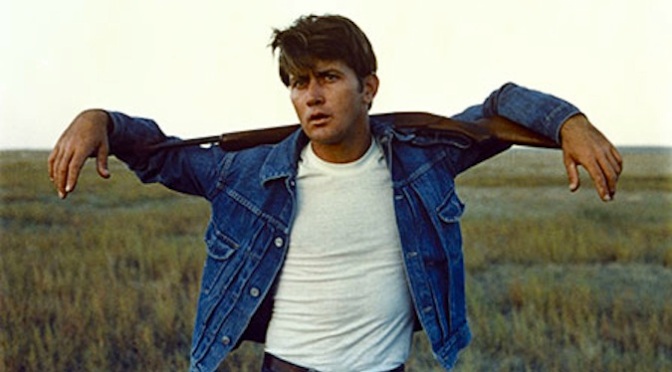 Terrence Malick’s debut feature film, Badlands, barrages its audience with the near-perfect execution of every aspect of film that one desires. From Malick’s masterful storytelling and characterization to the film’s deep insights on human nature and modern society alike, Badlands is full-on “GO!” for the entire ride. This film is absolutely filled with unexpected escalations and massive character arcs; thus, in respect to the film, this review  must contain spoilers. If you are in the most unfortunate circumstance of not yet having seen this film, I implore you to please discontinue your reading of this review now.

In one of the best performances of his career, Martin Sheen, and the less well known, but greatly talented, Sissy Spacek star in the ninety-four minute thrill ride that is Badlands. Loosely based on the real-life killing spree of Charles Starkweather and Caril Ann Fugate, the film follows Kit (Sheen) and Holly (Spacek), who represent the real couple, respectively. Now if that doesn’t set the scene for sudden escalation, in-depth character development and just the slightest pinch of horror – a.k.a. the makings of an awesome f@#cking movie – then I’m not sure what will. However, their journey starts in the relative calmness of rural Texas. Here, Holly is still a young, innocent girl. A young, innocent girl with a desperately ill mother, suffering from pneumonia in a time and place where modern medicine is not far reaching. Texas becomes the burial ground of Holly’s mother. Texas is where her father is too often reminded of the loss of the love of his life. So, the pair leave Texas, venturing to South Dakota, hoping for a fresh start.

South Dakota is where we first meet Kit, the James Dean look-alike greaser from “the wrong side of the tracks.” In these first moments of the film, Kit is portrayed as a confident, suave young man with a carefree attitude and a love for the spontaneous. However, as the film progresses, as we see Kit in his darkest moments, we begin to question the things we thought we knew about him. It becomes more and more clear that Kit is only hiding behind this studly persona to cope with a great lack of self-esteem and tremendous insecurity. More about this later.

South Dakota is also where Holly first meets Kit, who is initially wooed by his charm and impressed by his tuff looks (authentic greaser terminology). Holly is well aware that her father would never approve of her association with a fella like Kit – the kind who “throws trash” and chain-smokes like he’ll be dead tomorrow anyway. So, she hides her relationship with Kit from him, which ultimately results in the shooting of two living beings. The first is the shooting of Holly’s dog, done by her father as punishment for deceiving him. If this seems insignificant to you, take note that is seems to solidify a distinct distance between Holly and her father, pushing her only closer to the unstable Kit. The second is the shooting of Holly’s father, done by Kit as his only means to secure Holly as “his girl.” This scene has you gripping the arms of your chair, pleading with Kit not to shoot the father, yet the crazed look in his eyes tells you exactly what is about to happen. With these two shootings, we have what propels the entirety of the rest of the film. Holly makes the internal decision to side with Kit against her father after her father kills her beloved pet, and Kit’s action forces the pair to go on the run, which in turn leads to much, much more tumult and destruction.

It is while the couple are hiding out that we get all the juicy deliciousness that I had alluded to earlier. First, let me discuss the cinematography. This film was shot in 1973 for $450,000; just keep that in mind as you take in the gorgeous images that are captured by Tak Fujimoto. With such a relatively limited budget, Fujimoto is able to bring us majestic, breathtaking close-ups of mountains shrouded in clouds and cut-aways to massive, open fields that bring you to a world much unlike that of urban, or even suburban, life. Behind the imagery, Malick tacitly pairs Holly’s narration of her increasingly displeased perspective of what is happening with the film’s reoccurring theme song, Carl Orff’s “Gassenhauer.” Sounding a bit like it is meant to sooth a crying infant to sleep, the combination of the the images, female narration and relaxing music have you feeling as though you are perhaps witnessing a dream. However, the slight eerie dissonance of the song also causes you to think that you might, instead, be experiencing a nightmare. This is pure genius on the part of the debut film-maker.

Now, I move to the acting, focusing on Martin Sheen, which will also serve the purpose of describing the film’s remarkably quick accelerations and even more remarkable character designing. Sheen introduces Kit as a true greaser; he is handsome, he thinks deep, and, most importantly, he is cool. Sheen’s relaxed posture, disheveled hair-do and smirk all add to this personal with great authenticity. However, it is during the film’s sudden jerks in direction that Sheen reveals to us who Kit really is. With each rash decision Kit makes to bolster his list of victims, we see that same crazed look and a worried expression that if he doesn’t act quick, he will lose his girl.

As Sheen’s Kit becomes more and more comfortable around Holly, we see him gradually abandon his cool-guy persona, showing us who he really is. Kit is a bit of an asshole. He repeatedly remarks to Holly that she is unintelligent – when she says she doesn’t understand something that Kit has said, he replies, “I shouldn’t wish for miracles, should I?” Sheen patiently forms his character’s arc throughout the film, clearly delving into who is revealed by Sheen to be an internally tormented young man. It seems that perhaps Kit uses his greaser alter-ego and Holly, as his girl, to compensate for some deep-seated psychological issues. As the film comes closer to its end, this becomes increasingly apparent as Malick leaves plenty of clues for his audience to pick up on.

One is the dancing scene shared by Kit and Holly. They hold each other awkwardly; their movements are anything but flowing; they are clearly separated by something. I contend that Kit’s desperation to hold onto Holly is the cause of this. Another is when one of Kit’s captures states that Kit looks like James Dean. Kit’s clear elation at hearing this nods to the idea that he is literally violently desperate for acceptance. Finally, this notion seems to be confirmed by Kit’s return to the tuff greaser persona as he tosses his ordinary belongings to the excited U.S. soldiers who think of him as a celebrity. In these last moments of the film, Kit finds acceptance – albeit twisted and bizarre acceptance – and that’s all he ever wanted. 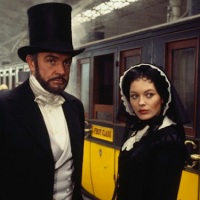 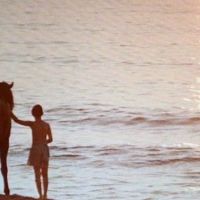 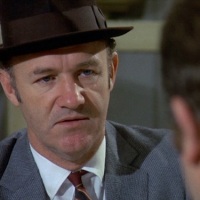 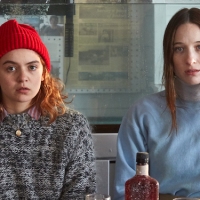 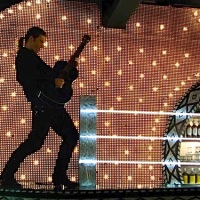 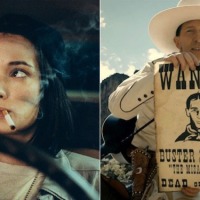