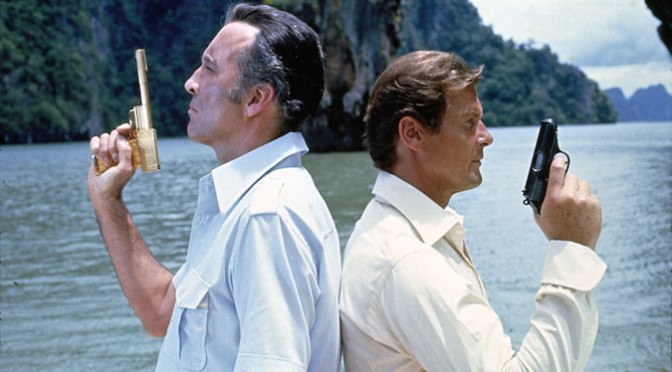 After dragging Sean Connery back one last time for Diamonds Are Forever, the hunt was on for a new Bond that would be so kind as to stick around for more than one movie. That meant the first movie starring this new Bond would have to be really good; instead, it was Live and Let Die. No more Connery to be found here, sadly, but also no more world domination plots or supervillain nutjobs — just drug trafficking and regular nutjobs. Live and Let Die is weird, sure, but it’s not good weird. The film is too weak and Roger Moore is too clueless for any of the weirdness to cut through the muck. But the follow-up The Man with the Golden Gun is weird, is good weird, and may in fact be the best weird you’re going to find in the entire Bond franchise.

The film was more or less pronounced Dead On Arrival. As Moore’s second outing, The Man with the Golden Gun continued to fail to live up to any of the Connery Bond films. You name it, the critics decried it: weak plot with low stakes; weak dialogue; weak delivery of that dialogue, particularly from Moore’s Bond; weak Bond girl Mary Goodnight; stupid, unimaginative gadgets like a flying car; stupid, unimaginative inclusion of that fat sheriff from Live and Let Die; and, most damning of all, the simple and nearly indescribable fact that something about this doesn’t feel like a Bond movie. “Maybe enough’s enough,” wrote one critic, which is a funny thing to read with Spectre, the 24th film in the series, being released this year. Nowadays we know that it doesn’t matter how terrible Bond gets, or how many films in a row are stinkers, or how many miscast actors are handed the license to kill. There will always be another Bond flick, another ten, until the time comes to cast an invading alien as 007 (coming to zombie-infested theaters everywhere).

The only point on that list I care to take issue with is the last one: that The Man with the Golden Gun doesn’t feel like a Bond movie. The overall tone is in fact one of the first indicators of the bizarre because it oscillates from one thing to the next. Naysayers say that’s weakness, a lack of control in script and/or direction, and they may very well be correct. But that doesn’t change the overall terrain of Golden Gun, which is part kung fu movie, part swashbuckling pirate adventure, part Most Dangerous Game, and part spy movie. The plot, weak though it may be, still does enough to unite all of these tonally discordant genres together in a single film. I’m not saying it’s intentional, but at the same time it doesn’t feel as accidental as the most all-over-the-place Bond outings.

And speaking of being all over the place, the various settings of Golden Gun were certainly an overt attempt at absurdity, and one that succeeds. Scaramanga’s island has the lushness and dripping rock of an exotic land:

His funhouse, by contrast, is sharp lines and acute angles:

Why, you ask, would the boat be tilted? What purpose does it serve for the story of Golden Gun? None at all, my friend. This marks a trend in the weirdness of Moore’s second Bond film, one where the weird stuff is simultaneously useless and powerful. That power is in the sheer fact that, for once, you actually remember where MI6 HQ is located. In nearly every other Bond movie that kind of thing is just a discrete film set; here, it’s memorable.

The greatest examples are in the characters. Nick Nack isn’t as cool or as dangerous as Oddjob or Jaws, but his is a character predicated on the same concept of off-kilter criminality. There’s something threatening about someone far removed from the heroic, upright, “normal” Bond, whether we’re talking stature or hat sharpness or enamel strength, and that’s why so many Bond henchmen are massive strongmen or of foreign descent or some other combination of freaky. The henchmen are decidedly not Bond, and in the case of Golden Gun it’s an impeccably-dressed and well-mannered French midget with a sadistic twist for games of life and death.

The main villains, though (the good ones, anyway) — if they’re not pure World Domination Maniac, then they usually are Bond. Goldfinger and Dr. No and Blofeld typify the former, but Agent Grant in From Russia with Love, Trevelyan in GoldenEye, Silva in Skyfall and a few other baddies are explicitly linked with Bond himself in one way or another. They’re Bizarro Bond, either a straight-up Russian version or a corrupted 00 agent or a former pupil of M who fell by the wayside; they’re almost always deformed, too, be it unnatural super-strength or facial scarring or melted insides. The point, when made well, is that Bond is one misaligned genotype away from becoming a monster.

Francisco Scaramanga is a blend of all of that, and better. The very first thing we learn about him — before his name, before his profession, before anything — is that the guy has three nipples. It’s one of the first visuals we’re treated to in the entire film, a weird human abnormality immediately in the wake of the beautiful establishing shot of the island. Scaramanga is better because his deformity isn’t a result of battle or training or past trauma. It isn’t a result of anything. It’s just a deformity, one he was born with, and again we see The Man with the Golden Gun peppering in the weirdness seemingly because it can. In Skyfall Silva is revealed to be deformed by M’s actions in a long-ago past that Bond shares, making the link to that “Bond could be a monster” idea explicit. It’s deformity for the sake of story; Golden Gun has deformity for the sake of weirdness.

One’s not necessarily better than the other, but there’s a reason we probably won’t ever get weirdness for the sake of weirdness in a Bond film again. The Man with the Golden Gun was made at a time when the thought of Bond ending for good wasn’t completely out of the question. Franchise filmmaking has undoubtedly changed since then (see: Horrible Bosses 2, but do not see that). Take the Marvel Cinematic Universe, one of the Bond franchise’s main competitors in terms of longevity. Guardians of the Galaxy was a bit oddball, but it wasn’t really that weird. It wasn’t as weird as it should have been, considering the context is outer space. It should have made people cringe with how inhuman it was (although I suppose Inhumans still has a shot); instead, Marvel needed Guardians to be popular. The two rarely go hand-in-hand, and so when the Lords of a Particular Franchise go to choose between weird and popular…well, that’s not much of a choice at all if you’re considering dollars and cents. But that’s why The Man with the Golden Gun stands out today when it didn’t in 1974 — it keeps Bond weird.