Grantland’s Chris Ryan makes a great point here about the way in which the James Bond franchise has changed, for better or worse, to not only gel with modern viewers but to fit the current model of blockbuster franchising. It was always the case that each 007 flick was a standalone film, made even more explicit with those little “James Bond will return” tags at the end. These are installments, and if this particular one stinks then we still have the next one to look forward to or the previous one to rewatch. If you want to jump in on a random one (like, say, Never Say Never Again — wait, bad example), that’s no problem. You won’t miss a step.

Ryan’s point is that all of that has changed now, as the Spectre trailer makes fairly heavy reference to Skyfall and even to Quantum of Solace and Casino Royale. This is continuity as Bond has never known, and Ryan further posits that the filmmaker might be the one who mainly benefits from such a thing — Spectre now seems “more important” than Skyfall (whatever that might mean) just by virtue of being a continuation of the story. Who wouldn’t rather direct “the Bond movie that the last few have been leading up to” over “the next Bond film in a string of other Bond films”?

Imagine for a moment that you’re Mr. or Mrs. Moviegoer in 1971. You like James Bond and are fairly impressed that the series stands at six installments, with a seventh on the way. Perhaps you didn’t care for George Lazenby as 007 in On Her Majesty’s Secret Service; Sean Connery, the Bond you know and love, is returning for Diamonds Are Forever, and so Secret Service more or less falls by the wayside. You’re excited for Connery. Diamonds opens on the tatami mats and sliding shoji screens of a Japanese-style room, and you grin at the subtle nod to You Only Live Twice — the last Bond film starring Connery (or: the most recent Bond film not counting the Lazenby one). A guy starts in on disposing of some henchmen, and his face isn’t shown but, come on, it’s him. It’s Bond, the real one.

If you ask me, Lazenby ain’t half-bad as Bond. For that matter, Roger Moore, Timothy Dalton, Pierce Brosnan and Daniel Craig ain’t half-bad either, but that’s beside the point. Continuity was a different thing in the film world of 1971 than it is today, as everyone and their mother is keen on pointing out, and so Diamonds Are Forever is instantly more than just the next Bond flick in these opening moments. It seems a continuation of the franchise as it should be, and you — 1971 Moviegoer — might even agree that Lazenby wasn’t half-bad in Secret Service…but he wasn’t Sean Connery, either.

Here’s the kicker: Diamonds Are Forever kinda sucks. It’s campy, boring, packed with idiotic characters and idiotic contraptions. The villains are particularly cartoonish — even Blofeld, who has a scene in a wig and lipstick — and the Bond girls are…well, they’re pretty typical Bond girls, actually. If anything they’re more scandalous than ever in Diamonds, with miles of cleavage to prove it, but it’s Vegas so they get the benefit of the doubt here. But Bond himself? Sure, it’s Sean Connery. He instantly recalls the quippy suave of old Bond, the “positively shocking” of Goldfinger, the dance scene at Kiss Kiss Club in Thunderball when he asks, politely, “Do you mind if my friend sits this one out? She’s just dead.” He does things that Lazenby could never muster in Diamonds, including the look he gives M after his boss states how refreshing it is to hear that there’s at least one subject Bond’s not an expert on:

But by the time the back half of Diamonds rolls around the novelty of slipping back into Old Familiar has faded, and we’re once again on a disposable Bond adventure that just kinda pales in comparison to Goldfinger or Thunderball, or arguably to any other Connery Bond flick. Part of this is the fault of the music (or lack thereof) which always seems to emphasize the wrong thing throughout the film and stays infuriatingly silent throughout many of the action scenes. Part of this is the fault of the writing, which sees the henchmen Mr. Wint and Mr. Kidd with Bond unconscious at their feet twice, but unable to kill him either time because, well, because convenience. There’s a scene where suave ol’ Bond more or less beats the shit out of two women and threatens to drown them in a pool — their names are Bambi and Thumper, but no, it’s not the copyright issues that concern me on this one.

If you’re Mr. or Mrs. Moviegoer, proud patron of your local cinema in 1971, what do you think when you walk out of Diamonds Are Forever? How do you anticipate the next Bond film once Roger Moore is announced as the third iteration of the character? In a sense it’s easier today because Bond has continuity now — we sort of know what to expect from Spectre because we’ve seen Skyfall. In another sense, though, it’s more difficult — how does Bond restart post-Craig? Does continuity continue in his absence? That seemed to work just fine with characters like M and Q and Moneypenny, often played by actors who outlasted successive Bonds with ease. But now the “timeline” has been toyed with, and the only certain thing is that Bond will return. He returned in Diamonds Are Forever — returned as the Bond we knew and loved — but by the end of that outing it might have seemed to some that it wasn’t what we wanted after all.  Bond changes in more ways than one from era to era; we wonder who will play him next after Daniel Craig, but we might also wonder who he’ll be. Your guess is as good as mine. 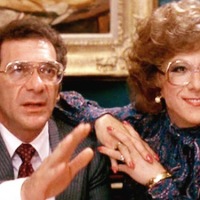