Let’s state up front that “Axis Mundi” is a hell of a season premiere. It’s utterly disorienting in the best way possible, fresh and yet eerily familiar, pushing The Leftovers into uncharted territory. If the premiere boldly goes where no Leftovers has gone before, then “A Matter of Geography” is the return to Earth, the necessary where-are-they-now refresher that connects the seasons in a narrative sense.

It’s not anywhere near as strong as “Axis Mundi”, but “Geography” is still a highly emotional hour. There’s a niggling sense that the cliffhanger at the end of “Mundi” won’t be revisited for a few more weeks, as “Geography” takes us back to Mapleton and next week’s episode looks to be dealing with the New York town as well, reconnecting with Laurie and Tom Garvey. But there’s more than enough in “Geography” to touch on in the lead-up to that final scene, which mirrors the final scene from the premiere but adds a completely new dimension to it.

The most interesting thing about “Geography” is the consistent insistence that everything is going to be okay. The Leftovers is a show about living in the shadow of an awful thing, a world where everything needs the post– prefix. It’s a dying world, living through the last gasps of something, about to give way to something else. Yet last season the pessimism and doom was as voluble as the hope for a new world was silent, peeking out only in small ways in the lives of the characters. This season is already markedly different. In “Axis Mundi” there’s an entire town of safe, happy people. Here in “Geography”, Kevin spills his guts about the events of last season’s “Cairo” while Nora spills hers about “Guest“, and both then agree that, well, yeah: it’s okay. Even when Kevin exhumes Patti’s body and gets pulled over on purpose and all but admits to being responsible for her death, he gets off the hook. The house they rented in Jarden burned down…but they get another one. John Murphy’s cake is ruined…but the pie will suffice. Everything’s okay, and for The Leftovers that’s really weird.

…so, of course, we begin to suspect that everything is decidedly not okay, and yeah: it’s not. There are several levels to this, not least of which being the fact that Leftovers is a highly emotional show about loss and thus setting up our characters with new gains (pies, houses, adopted babies, etc.) is in some sense tantamount to setting them up with new things to eventually lose. That’s a bit of a crude way of putting it, especially considering what the characters have been through in the first season and how badly they all need these small gains. It’s emotional in and of itself; Kevin Garvey Sr. gives voice to this in “Geography” when his son voices doubt: “I could sit around crying about how the world fucking ended, or…I could start it up again.”

That’s a huge line, because most everyone (myself included) assumed the majority of the HBO series would be about the former. Every season, well-made, beautifully-crafted, and supremely affecting, would ultimately amount to sitting around crying about the old world. But maybe The Leftovers is actually about starting the new one.

And if that’s true, it’s already evident that it’s as difficult as it sounds, starting a new world. When Kevin and Nora adopt Lily the hard-nosed adoption agent suddenly asks “Would you like to adopt another child?” There’s an opportunity for so much more good to be done in the world, so much so that Kevin and Nora can’t even do enough by adopting Lily, or aren’t truly equipped to do so. The sense that making Lily a part of the family isn’t enough is made explicit here, and more than that: their gain is also Tommy’s loss. Tommy was technically the previous caretaker of Holy Wayne’s baby, and he states in “Geography” that he’s definitely “not okay”. In this The Leftovers raises the possibility that he’s right.

And lastly, the final scene of “Geography” seemed to put an even finer point on that possibility. Kevin, who experienced severe sleepwalking in the past, awakens in the freshly-drained lagoon with a cinderblock tied to his ankle. In our review of last season’s “Cairo”, we discussed Sleeping Kevin as a sort of member of the Departed, a ghost suffering all of the repressed pain of Awake Kevin. One prediction for the oblique ending of “A Matter of Geography” is that Kevin, walking around all day proclaiming everything to be okay, attempts to kill himself in his sleep. There are other possibilities, sure, but this one ties back to “Cairo” and ties into the themes of the life that everyone his beneath their outward emotions. Odds are by the time we revisit the lagoon a few episodes from now we’ll have one more answer and two more questions. Until then, at least the poster now makes more sense: 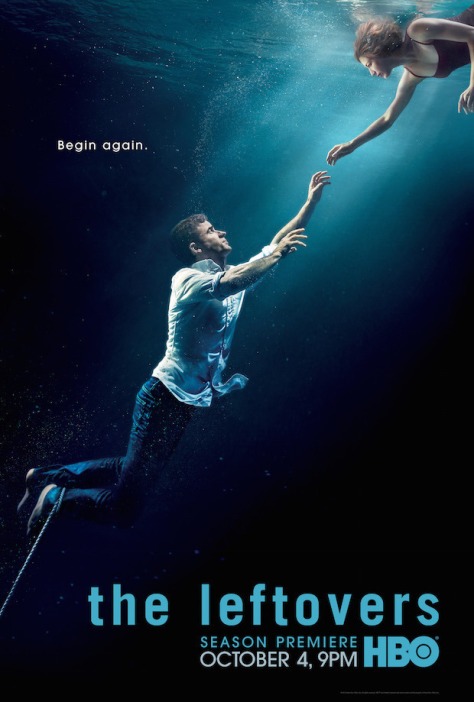 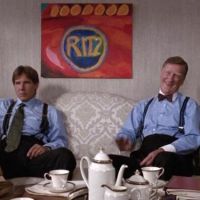