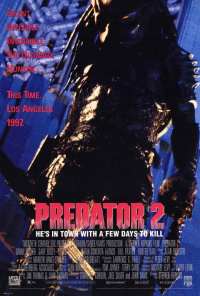 The sequel to Schwarzenegger’s 1987 game of cat and mouse is gloriously, spine-removingly over-the-top in every regard. The entire movie is mayhem. Everyone is yelling. There is not a single scene of relative calm or quiet, not even a tense sequence where Predator’s silently stalking someone. If the first film was a game of cat and mouse, Predator 2 is a game of…yeah, just yelling, actually. No metaphor need apply. Everyone is yelling and sweating and firing guns and spitting out motherfuckers like they’re sunflower seeds. Even the freaking alien from another planet, terrifyingly mute until the climax of the original movie, opens his toothy mouth in the sequel to call Danny Glover a motherfucker:

In part, this is what made the first film a prime cult actioner: a bunch of macho bullshit. The ’80s was the Golden Age of Macho Bullshit, and yes, as far as film history is concerned, we should absolutely count 1990 as part of the ’80s. That year alone had the schlockfests Teenage Mutant Ninja Turtles, Tremors and Darkman; it also had the barrage of bizarre sequels that included Die Hard 2, RoboCop 2, Another 48 Hours and Child’s Play 2, among others. If you exhibited the costuming or set design or even the dialogue from those films and said they were produced in the mid-’80s, I’d believe you. Predator 2 is quite at home with all of those popcorn flicks, though 1990 also had genuinely great films like Goodfellas and Awakenings. Heck, Predator 2 opened within a week of Home Alone, Rocky V, Dances with Wolves and Misery. That’s some stiff competition.

Which left P2 to distinguish itself by continually dialing up the ridiculousness until the film has no choice but to seemingly break off mid-scene rather than actually conclude. Director Stephen Hopkins had by this point served as Assistant Director on Highlander and made his American debut with Nightmare on Elm Street 5: The Dream Child, which is quite frankly a résumé that should qualify you for anything. His direction is somehow terse, distracted, clambering to make way for the next scene, which is maybe fitting for a script utterly unconcerned with any meaningful mythos-building. This leaves us with a weird-ass gang war subplot, Gary Busey playing Mr. Freeze, costuming straight out of Fifth Element, an out-of-nowhere shift to Legends of the Hidden Temple for the last ten minutes of the film, and nothing at all to tie these components together.

P2 isn’t devoid of creative ideas that could push the franchise forward, but it stubbornly refuses to expand upon them at all (“mythos-suggesting”). So we learn that the Predator won’t kill a pregnant female, but then that character (the movie’s sole woman) gets knocked out and disappears for the rest of the film. Were we told she was pregnant before, somewhere in all of that yelling, or was that development just added for this one inconsequential moment? We see the Predator using the mask as a kind of steroid (à la Bane), but then that idea also fizzles and goes nowhere. And, yes, we learn that the Predator can actually speak English, be it through mimicry or hyperintelligence or Alien Rosetta Stone, and yet of course the dialogue we’re treated to with this miraculous revelation is Pred’ calling Danny Glover a motherfucker.

And Danny Glover! He plays tough-cop Harrigan and he screams FUCK! on four separate occasions before we even glimpse an actual Predator (about 25 minutes into the film). His ‘roid rage isn’t quite at Schwarzenegger’s level, but damn if it isn’t close (Schwarzenegger wisely opted for Total Recall, released earlier that June, instead of returning for P2). Glover’s also sweating profusely for the entire runtime. If sweating is an actual thing you can act, like crying on command, then this dude is acting his ass off.

Fast-forward to today, with Black’s The Predator in theaters. The revamp isn’t all bad, with a surprising number of laugh-out-loud moments and some inventive gory kills. The movie does indeed demonstrate some understanding of what the audience might expect from a movie called The Predator. But maybe that’s the problem, because the first two Predators obviously didn’t give a shit what the audience might expect. The 2018 update feels neutered, like it’s trying to justify an R rating with an overload of blood and f-bombs; the blood is CGI, the f-bombs arbitrary, and The Predator on the whole feels like it was conceived after Kingsman and Mad Max and Deadpool and Logan did good things for Hollywood’s bank account. The muscles it flexes are muscles we’ve seen before, certainly not those of an “explosive reinvention.”

The original Predator didn’t overextend itself in order to appeal to adult audiences. The brilliant moments of cheesy macho bullshit came in something as simple as a handshake. Hell, I’d give the thing an R-rating for this alone:

And the first sequel didn’t do that, either. The MPAA initially gave Predator 2 an NC-17 rating, so Hopkins and Co. actually cut a bunch of scenes to bring it down to an R. These movies are loud in a way we will never see again, meaning they’re bombastic, roaring, lurid, over-the-top. The 2018 Predator is loud, sure, because it’s trying to be, meaning it’s just straight-up obnoxious. When the 2018 Predator opens his mouth it’s not to call anyone a motherfucker — it’s to disperse plot exposition. Ew.

Maybe it’s not fair to fault Shane Black; this is just the world we’re in now, three decades removed from the heyday of Arnold Schwarzenegger’s glistening pectorals and Danny Glover’s glistening everything. Still, the greatest lesson of the beautifully absurd Predator 2 should be this: when Gary Busey appears to be the most understated and elegant presence in your film, you’re doing it right.