Any cook will admit that having delicious ingredients doesn’t necessarily make for a delicious meal, even if you are faithful to the recipe. The most masterful chef can combine a snazzy main course with cool, exotic sauces and side dishes, pepper in some flair, and tie it all together with pristine presentation — but if the temperature isn’t just right, or if just one of the ingredients has started to turn, or if the sous-chef finally makes his move by sabotaging his tyrannical chef’s best meal, well, at least those would be reasons. Sometimes it just doesn’t taste good. Questions arise: why didn’t the dish work? Didn’t we follow the recipe to the letter? Did you freeze that thing overnight like I told you to? When does one traditionally bring their extended metaphor to a close? Now?

Havana had all the ingredients. Sydney Pollack’s previous film Out of Africa walked home with Best Picture and a cartful of other Academy Awards; Robert Redford, longtime Pollack collaborator, was back for his seventh (!) go-round under Pollack’s guidance. Right there you’d think success would be imminent. Of all the famous Director-Actor partnerships, Pollack-Redford is perhaps the most dynamic, the most unexpected, the one that results in classics that span more than one genre. The pair met as actors on the low-budget 1960 film War Hunt, as recounted by Redford in his tribute to Pollack in Time following the latter’s passing, wherein Redford uses the term “kindred spirits”. The success of the adventurous Jeremiah Johnson, the thrilling Three Days of the Condor, the intimate Electric Horseman and the epic Out of Africa would all support that claim.

END_OF_DOCUMENT_TOKEN_TO_BE_REPLACED 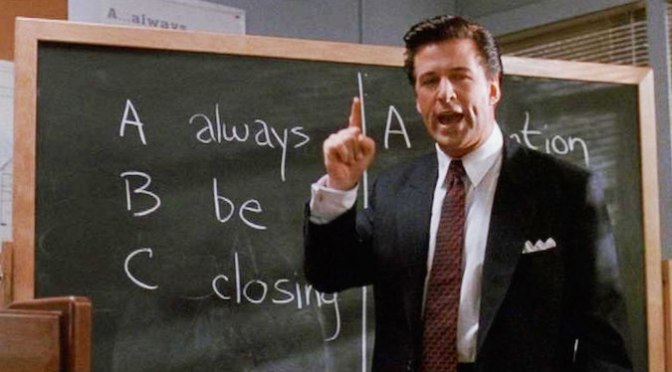 Al Pacino, Jack Lemmon, Alan Arkin, Ed Harris, and Kevin Spacey all in one movie, each with significant time in front of the camera. Who steals the show? If you guessed none of the above, you either were too afraid to guess or you’ve seen Glengarry Glen Ross. GGR does have all of these actors for the entire movie; it also has Alec Baldwin for one scene.

In the end, three minutes of Baldwin overshadow an hour and a half of some of the greatest actors of more than one generation. His brief, but memorable performance can be likened to that of Matthew McConaughey’s in The Wolf of Wall Street. In both cases, they achieve the goal of all actors/characters — to be memorable in just one scene.