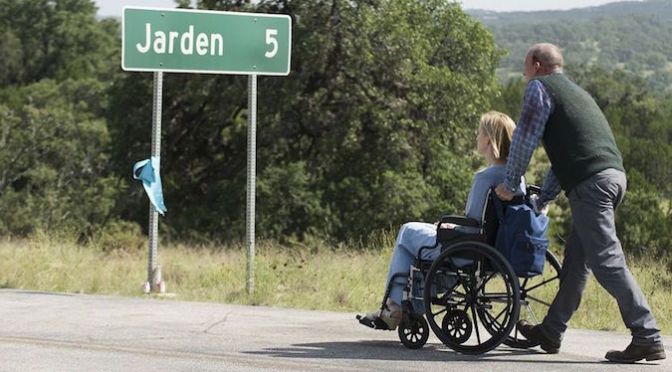 Ah, Matt Jamison. He’s not the main character of The Leftovers. He’s not the one most directly affected by the Sudden Departure, nor is he the one who’s lived most nobly in its wake, nor is he a handsome shining studly hero with a constant grimace (see: Kevin Garvey; John Murphy). But anyone who’s seen last season’s “Two Boats and a Helicopter” knows that Matt Jamison was the most passionate character in the whole of the show, the most tragic, and now that we’ve had another Matt-centric episode in “No Room at the Inn” it’s safe to say that those characteristics carry over into the second season.

We’ll talk about the cyclical writing involved in Matt’s stories, but first: Christopher Eccleston. There’s a lot of strong acting in The Leftovers, with Kevin Carroll’s John Murphy being the particular standout in season two. Eccleston is the veteran to Carroll’s newcomer, but the scenes between the two of them in “No Room” absolutely crackle. And for the duration of the episode Eccleston exudes an easy sense of identification with his character; he’s so natural as Matt that if more people watched The Leftovers Eccleston might stop being “the guy from Doctor Who” and start being “the guy from The Leftovers“.

In our “Two Boats and a Helicopter” review we lauded the incredible harshness of the unending 180° twists in Matt’s story, with Life giving him a Big Win followed by a Crippling Loss again and again. It was as if Matt was caught in some kind of cosmic cycle, one wherein his faith would either seem to be rewarded or punished. “No Room” takes that cyclical nature one step further, as we see Matt purposefully living out the same day over and over again. He awakens, he eats some cereal, he puts the radio on, he wakes up his wife Mary, church, grocery store, back home, microwave burrito, etc. etc. etc.

Before, though, the vicious cycle was forced upon him; now, Matt’s electing to live life Groundhog Day-style because he thinks it will bring Mary out of her vegetative state. He maintains that Jarden has rightfully earned the new-world moniker of Miracle, that the holiness of the place is “real”, and that it was more than mere coincidence that all 9,261 town residents were spared in the Departure. He tries to replicate the exact circumstances that seemed to bring Mary back to life, making sure everything is perfect, but to no avail. Though Mary wasn’t taken in the Departure, she vanished all the same. Matt’s plight is somehow more tragic because his Dearly Departed is still sitting right next to him — she just won’t look at him.

So Miracle, this place that seems to have been spared by the Wrath of Whatever, this place where a vegetative Mary becomes normal Mary for a little while, is at first without a doubt the best place on the planet. No one vanished from here, and to go one further, a semi-departed person even returned for a little while against all odds. And yet for Matt all of that possibility is more torturous for never resolving. The visible and the invisible is at the heart of a lot of The Leftovers — those who vanished did so without a trace — and so Matt’s hurt in particular is intensified by the whole so-close-and-yet-so-far thing. The elation of the tourists, the reverence and thanks of the congregation, the broad billboards exclaiming that Miracle is a place of purity and sanctuary — for Matt, all of that has a particular ring of falsehood to it. For Matt, living in Miracle might actually be worse.

On a semi-related note, can we all just agree that the best way to utilize a camera is to stick it at the end of a tunnel and make actors walk towards it?