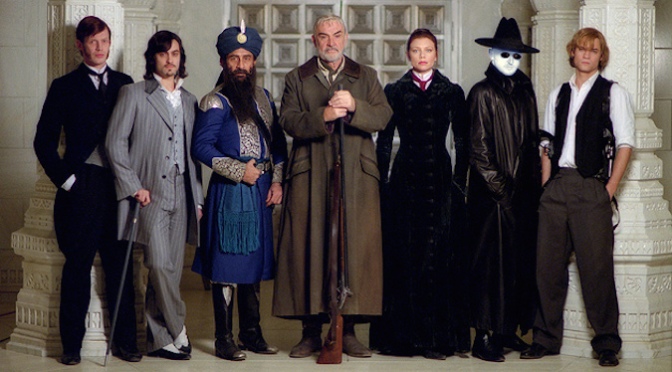 “The planet of the imagination is as old as we are.”

A writer may find that having a particular way with words is somewhat valuable to the craft, potentially essential, undeniably rare, exhilaratingly natural. Some may be taken aback by the words of others and seek to do the same with their own, maybe even coming to take it for granted if that way with words becomes a familiar way. Writing is sharpening, and just as a pitcher pitches to improve his pitching so too does a writer write to improve his writing. Some, like Ezra Pound, recognize that words are tools and there is a correct tool for a particular job. There is in fact a correct way to tell a particular story. Some, like Alan Moore, recognize that all of that is a crock of bullshit.

Which is not to insinuate that something like The League of Extraordinary Gentlemen is not well-written, at least in the comic format of Moore’s original publication. It is. As with the impressive majority of Moore’s works League seems leagues beyond the typical comic, nurtured with a higher degree of care or just drawn from a more inspired place. It operates on a higher plane. This cannot be said truthfully of the film version, though by now that’s sort of a preconditioned assumption.

But to a well-read Mooreist (Mooreian? Moron?) the most surprising thing about the League comic might be that it’s just a damn blast. It’s fast, it’s fun, it’s funny, it’s consistently driven by action and conflict rather than introspection. There is an intentionally glib sheen to the entire affair, a sense which is strengthened by the humorous chapter tails (“If man ye be and not some craven dog of Flanders, then in G___’s name do not miss our profuse climax!”) and the narrative’s structure as installments of one Boy’s Picture Monthly (“…sure to prove exciting to the manly, outwardgoing youngster of today”); even the credits on the back of the first volume cite Moore as “author and former circus exhibit”. Unlike V for Vendetta or Watchmen there is surprisingly little politicking, and unlike From Hell few of the characters can be said to be endowed with this aforementioned way with words. The comic, in the best way possible, is simple.

The 2003 blockbuster adaptation — sometimes styled as LXG in order to more fully betray the swift discarding of the tender care Moore displayed for the Victorian Era in favor of anything “badass” — is simple in an altogether different sense of the word. There is nothing to counterbalance the lack of profundity in the writing or character motivations, nothing to make you shrug and say well, at least it was fun. There is plenty of action, none of it particularly inventive, and at times the play-by-plays are utterly contrived. The characters themselves are perhaps not meant to be “likable” in the first place, and if so LXG is at least proceeding according to plan on one count. Still, even “unlikable” film characters — take Social Network‘s Mark Zuckerberg, or Wolf of Wall Street‘s Jordan Belfort, or Nightcrawler‘s Lou Bloom, or anyone else that leaps to mind — can be memorable; the mere fact that they do leap to mind is evidence of that.

If the characters of LXG are memorable, it’s likely because they’re cartoonish and wear funny clothes rather than because of any actual personality. Sean Connery leads the cast as Allan Quatermain, who is possibly immortal and also a crack shot with a gun; Dorian Gray, also possibly immortal; Nemo, who’s a scientist and a part-time swordsman; Jekyll, who’s a scientist and a part-time rage monster; Mina, vampire; Skinner, invisible; and Tom Sawyer, who is a crack shot with a gun and also an American. This last addition — Gray and Sawyer are not in the comic — is frustrating to a point, less so once we consider that the League-on-film could very well have been 100% Americanized instead of just 14.28%. Regardless, these “superpowers” are mistaken for actual personalities and contribute significantly to the simplistic nature of the movie.

In retrospect, the simplicity of the League comic is justified by the underlying intent of the work. In his CBR interview Alan Moore refers to the Fiction section at the library as “the planet of the imagination”, implying that all of these works implicitly connect to form a cultural creative consciousness. Wouldn’t it be a wonderful, otherworldly experience to visit this planet? League came into creation with this as the foundational assumption:

Fiction is clearly one of the first things that we do when we stand upright as a species — we tell each other stories. Now, Nature doesn’t do things for decorative purposes, except like giving peacocks wonderful plumage so they can attract a mate, but since there seems to be little point to telling each other stories all the time — except there must be. We have depended upon them and to some degree the fictional world is completely intertwined and interdependent with the material world. A lot of the dreams that shape us and, presumably, our world leaders, are fictions. When we’re growing up, we perhaps base ourselves on an ideal, and even if that ideal is a real living person, there is every chance that living person may have based themselves on a fictional ideal.

This is all by way of explaining “the interdependence between the world of fiction and the world of fact”, and this isn’t just an after-the-fact consideration with regards to League. Again, though the level of politicking is significantly lessened in favor of action and adventure as compared to V for Vendetta or Watchmen, there are still some political characters seeking to control the League and, thus, thematically, seeking to control our collective creative consciousness. The Black Dossier, the third installment of the League series, addresses this more explicitly than the first two, but it’s still readily apparent in the intent of the entire work.

What is the intent behind the LXG movie? Is it a mirror of the intent of the comic, to expose this politicking and let it be gloriously overridden by the adventure at hand? Is it something else entirely? Or is there simply no intent at all, other than a few bucks for those behind the steering wheel and a summer vehicle for Sean Connery? The sneaking suspicion, of course, suggests the latter. But who knows. Intent, perhaps, is inescapably secondary in a multi-million dollar Hollywood production. The League of Extraordinary Gentlemen is meant to be representative of the planet of the imagination, a mosaic of the fantastic capabilities of the writer, the earthbound creator. That sentiment seems grandiose only in the context of the LXG film, depicting a landscape representative of no planet I wish to visit.

One thought on “The League of Extraordinary Gentlemen (2003)”