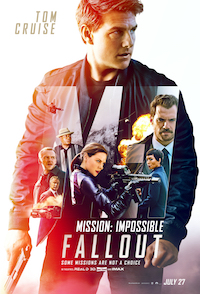 If you’re a connoisseur of modern helicopter cinema, then Mission: Impossible – Fallout is the event of the season. Not since Black Hawk Down has the Neo-Copterism movement asserted such a well-defined visual aesthetic, such elevated narrative and tonal language, such awesome fucking explosions. Everything a refined and learned copterhead cinephile could possibly desire finds fresh life here. There is an absurdist, Lynchian quality infused into the rhythmic weaving of two whirlybirds; there are rarefied, Brechtian attributes present in those characters left on the ground. There is a continuation of the leitmotif established in the first Mission: Impossible‘s chopper-chase finale. When read through the lens of the tenets of cinéma vérité, Fallout delivers a powerful indictment of those who don’t actually know how to fly such a machine. And, in a move sure to receive recognition come awards season, auteur director Christopher McQuarrie playfully inverts the male gaze by literally flipping Tom Cruise upside down in a helicopter.

…whoops. Sorry, folks. Had my Snobometer set to High. Still, the fact remains that if there’s any Mission: Impossible movie able to withstand a level of actual criticism, it’s probably Fallout. Here, for the first time, Ethan Hunt is challenged to question whether he should choose to accept every mission that comes his way; maybe those self-destructing messages are actually destructive to Ethan’s self. That’s already a higher-level starting point for this character than any of the previous five films cared to put forth, content instead with wall-to-wall action and death-defying stuntwork.

Fallout has those things too, of course. McQuarrie throws Tom Cruise and newcomer Henry Cavill out of a plane, onto speeding motorcycles, across rooftops, into helicopters, out of helicopters, and then off a sharp cliff for good measure. In what’s become the calling card of the series, much of this craziness was accomplished in-camera. Aside from putting Cruise’s stunt doubles and life insurance providers out of business, the effect is an actioner with more edge-of-your-seat moments than any other film so far this year.

Admittedly, it’s rare that an action movie has any of those moments at all. When shit hits the fan in a James Bond movie or in Avengers or Star Wars or any other big-budget franchise, you can be fairly certain that your protagonists aren’t really in peril. That doesn’t mean those movies can’t be entertaining, but it does mean that we sort of view Bond and Indiana Jones and comic book characters as immortal, everlasting heroes who will always keep fighting the good fight no matter what. Part of Hunt’s appeal is his destructibility, his failures, and the sense that he and his supporting team are actually knocking on death’s door in earnest. The fact that the actor playing Hunt is doing the same definitely helps.

Fallout only falters occasionally in its plotting, which involves the remnants of Rogue Nation‘s evil Syndicate — now dubbed The Apostles — and the forcible intrusion of the CIA into the IMF’s affairs. For a spy film as progressive as this, and for a franchise installment with a surprising amount of youthful vigor, the disarming of a big bomb feels sort of rote as far as narrative fuel is concerned (not to mention the disarming of a big bomb as the finale of Ghost Protocol). The Apostles never really feel like a sinister force the same way The Syndicate did, and to make matters worse, Fallout very nearly manages to make returning villain Solomon Lane into a boring, ineffective baddie. His motivation and the motivation of the mysterious “John Lark” amount to an oft-repeated phrase (“the greater the suffering, the greater the peace”) which in turn amounts to…nothing at all. When held up against the tighter efforts of Ghost Protocol and Rogue Nation, Fallout is somewhat less incisive with the plotlines it chooses to follow.

Sometimes this results in a great moment of comedy, as when Hunt unwittingly leads his pursuers through an otherwise-solemn funeral. Other times it results in something brand-new to the Mission: Impossible franchise, like Ethan’s fever dreams of future death and destruction. On the flip side, sometimes negotiations with “brokers” meander while great characters like Simon Pegg’s Benji have to wait patiently to re-enter the film. When all is said and done, though, Fallout moves quickly and has more than enough brains and brawn to forgive a rehashed plot.

We’d be remiss not to focus on those action scenes for a second, if only to eventually arrive at the foregone conclusion that yes, that stunt was ridiculous or no, I can’t believe they really did that. The helicopter finale is indeed bonkers, and it’s evident that Cruise is actually climbing into the thing while it’s already airborne, then flying the thing in a corkscrew toward a mountain, then crashing it headlong into another copter (okay, that last one was probably done up in post). Kudos #1 actually goes to McQuarrie, who knows that getting his lead man to do all of this crazy shit won’t mean anything if that reality isn’t translated to the screen. If the camera’s not telling the whole story, then it could just as easily be someone else flying that copter while Cruise sits in a trailer and gets his face CGI’d onto a pilot’s shoulders. Instead, they did this:

Kudos #2 goes to Cruise, obviously, but let’s laud the smaller-scale stuff he accomplishes in Fallout. Stunts where he sprints across a rooftop and rides a motorcycle through a crowded roundabout can be just as dangerous as flying a helicopter, and these action sequences are almost more visceral than the finale stuff for how frequently we’ve seen similar, less-intense versions in other movies. And stuntwork aside, Cruise finally gets to imbue Ethan with some self-doubt throughout this adventure; the pained way he shakes his head when he’s forced to drive into his onetime friend Ilsa makes for a surprisingly effective beat, and one imagines a previous Mission would’ve ignored that opportunity in favor of the next explosion.

The Mission: Impossible franchise has managed some level of greatness largely by accident, meaning that the first film was never meant to spawn an ongoing series. If it had, you can bet that the onset of the almighty IP and shared-universe model of moviemaking would have been applied here for a “more cohesive experience.” Maybe the Missions are even trending that way, with Fallout marking the first time a director and a previous villain have returned. But Fallout is best when it’s not relying on missions that have already been accomplished, and as such it’s a hell of an action movie and strong sign of things to come for Mission: Impossible.