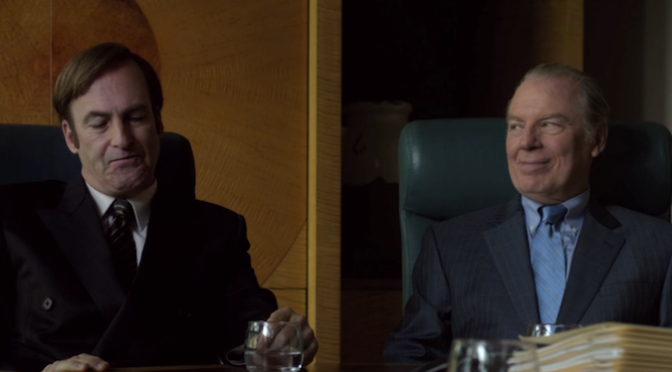 Sometimes we don’t get to dive into each individual episode of Better Call Saul as deeply as we’d like. We have busy lives! Important things to do! Climb that mountain! Finish that novel! Make that bed! Drink that beer! Eat those chips! If there’s anything to knock routine by the wayside and demand our full attention, though, it’s Saul‘s ninth hour “Pimento”, the penultimate episode of the first season. The mountain and the novel and the unmade bed will have to wait (the beer and chips are right here, because multitasking); in this review we aim to pick apart the incredibly dense “Pimento” and put it all back together again.

First up: some self-congratulatory horn-tooting for kinda sorta predicting the big reveal of “Pimento” in our review of the previous episode “RICO“. We’ll save our discussion of that until after the jump for the sake of spoilers, but for now let it be sufficient to state that our reputation precedes us, that we have no equal on this earth, that the tales and songs fall utterly short of our enormity. Gaze upon our magnificence. We are fire. We are death.

…okay, ready? SPOILER: Chuck is a total f*cking d*ck! We surmised last week that Jimmy’s stunted evolution from mailboy into lawyer may have actually been steered by his older brother and not, in fact, by the ostensibly hateful Howard Hamlin. “Pimento” not only revealed the truth of that but did so in a crushingly effective way. Ever since the pilot of Saul we’ve seen how Jimmy wants to impress his brother Chuck (we did a mini-rundown on that in our “RICO” review, too), and a primary way he tries to accomplish that is by following in his footsteps and becoming a lawyer. Due to Chuck’s strange affliction, Jimmy also ends up helping his brother out a lot. He brings ice and bacon on a regular basis, gently lends an arm to Chuck as he walks outside like a vampire in “Pimento”, and nearly singlehandedly orchestrates his valiant return to HHM. “We don’t need them!” he says when Chuck proposes HHM’s involvement in their case. Jimmy loves the idea of we, and he clearly loves and looks up to his brother.

When Chuck makes a 2am phone call on Jimmy’s phone we start to sense something is up. “The partners have made a decision,” Howard Hamlin says later. There’s no indication — at least not to Jimmy — that the constant kicks while he’s already down are coming from Chuck, not Howard. The relationship between these three men and the all-hallowed halls of HHM just became a lot more complicated, and a lot more beautiful. Consider all the work Jimmy put into tarnishing Howard’s image with his billboard scam in “Hero“; consider all the work Jimmy put into protecting Chuck’s stake in the company from what he perceived to be Howard’s advances in “Alpine Shepherd Boy“; it’s hard not to think of past episodes now that “Pimento” has turned the tables on Chuck’s character. Imagine Howard’s frustration at being wedged into the center of a brotherly spat, especially a spat in which one brother has no clue what’s going on. Howard has gone so far as to forcibly remove Jimmy from the HHM building, and in “Pimento” he watches Jimmy chauffeur Chuck into the exact same lobby to meet with deafening applause.

Jimmy’s right to be angry with Chuck, especially since the anger he’s been lobbing at Howard all of these years has been misplaced. Our review of “RICO” asked whether this possibility — now reality — would be the straw that breaks the Jimmy’s back, i.e. the event that “transforms” Jimmy into Saul Goodman. While calling it a “transformation” is probably simplifying it too much, the rift between the McGill Brothers is almost certainly a defining moment for Jimmy. “You take these shortcuts and you think you’re my peer?” says Chuck angrily. “Slippin’ Jimmy with a law degree is like a chimp with a machine gun,” he says, “and you know it, too.” Poor Jimmy.

On another level, though, this line from Chuck can kind of be viewed as a silver lining for Better Call Saul. We have to really pull back from “Pimento” to see it, and that’s admittedly hard because the episode is so engrossing. But a chimp with a machine gun is the kind of comparison that Saul Goodman might actually relish someday: to be the thorn in the side of the entitled legal elite that his d*ck brother now represents. The pain is raw at the end of “Pimento”, but eventually Jimmy might choose to rage against such d*ckery with all of his machine gun-wielding chimpanzee might.

That silver lining would take us one step closer to the world of Breaking Bad, and director Thomas Schnauz uses the Mike storyline in “Pimento” to remind us that the world of Better Call Saul is almost the same world, but not quite. Schnauz is a guy we should trust with the Bad legacy, as he worked on the original series and on The X-Files with Vince Gilligan prior to that. He also wrote Saul‘s third episode “Nacho“, and that title character returned for a brief moment during a drug deal that alluded humorously to Saul‘s predecessor. After some parking garage badassery, Mike serves as bodyguard/criminal advisor to the guy that Walter White used to be. Sneakers, glasses, tucked in shirt with nerves on his sleeve, the White Drug Kingpin of “Pimento” needs all the help he can get. And Mike gives it to him, not only in the form of badassery but with a neat soliloquy on good guys, bad guys, good criminals, and bad criminals, essentially expounding on exactly the kind of thing he’ll someday play witness to during the events of Breaking Bad. If Walt wasn’t Walt, he’d be this guy.

And speaking of Bad, it’s endlessly impressive that something as simple as Mike’s love for pimento cheese can serve as a callback to the original show. In Bad 4.6 “Cornered”, Mike’s on stakeout with Jesse Pinkman when he turns to him and offers a sandwich: “Pimento cheese. How does that sound?” Even if easter eggs and callbacks aren’t of any interest to you, it’s comforting to know that Saul is structured with the same attention to detail as Bad always was. Need more proof of that? Take a look at what Schnauz posted on Twitter after the episode aired:

That’s a storyboard for this single episode. This level of care is probably what makes it so easy for us viewers to care about Jimmy, paired with the fact that Bob Odenkirk is so indescribably believable as the upstart crow of criminal lawyers. Showrunner Peter Gould said it best: “We like Saul Goodman, but we love Jimmy McGill.”

Lastly, here’s some awesome fan art from Matt Talbot that does great justice to that David and Goliath battle depicted in “Pimento”. He’s crafted a poster for each episode of Saul‘s rookie season, all of which can be viewed here. Here’s raising a glass to the strongest episode of Better Call Saul yet, and to hoping the season finale will deliver as well. 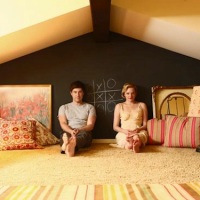